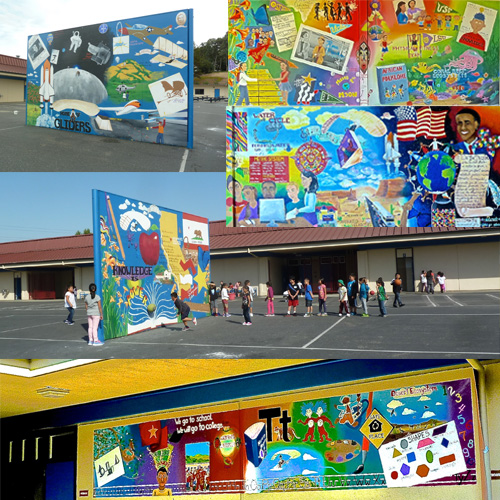 This project located at John J. Montgomery Elementary School in the Evergreen Elementary School District was a second phase to a previous series as well as a face lift for the Hand Ball Wall.  Here’s a taste of the first phase – which we’ve featured the California Standards, civil rights leaders, diversity, goals, etc.

This project took all summer, but was worth every minute.  We started the first week students were out of school and went through the first week of the school year.  This is a client and school that I love, so I was more than happy to return.

Our second phase in the courtyard was comprised of 3 distinct murals finishing the other three walls across from the original murals.  We had to match our previous style choices, beef up the brightness and color, and we had a couple new messages in mind.  I say we, but I am referring to myself and the principal/client – whose input I solicited at times, and was given at any time she wanted and thankfully so.  I hear my clients.

The first of this second phase murals said good-bye to a well-respected PTA president who did a great deal for the school and passed away last school year, but we also incorporated our California Standards/subject matter, common core learning symbols and feature our first black president as our civil rights focus on this mural.  We like Barack Obama for reminding students to not be afraid to be the first one blazing a great trail.

This next mural in our second grade is nestled between a couple of kindergarten classrooms.  This mural celebrates the kindergarten curriculum with bright bold imagery – their favorite books, lifecycles, alphabet, numbers, colors and shapes.  This mural also helps our youngest students understand the goals we hold for them.  I used some of the same blue from the school’s trim within the work, which initially seemed subtle however some of the teachers did catch on.

The third mural in our second phase was by the principal’s office.  This one ultimately says good bye to a well loved principal, acknowledges the teachers and celebrates anti-bullying and common core while incorporating our visual narrative and subject matter.  Rosa Parks was our civil rights leader for this mural.  Each of my murals at this school incorporate a version of its mascot – the Gliders built by John J. Montgomery, the school’s namesake.  This one was a newsprint design from the early 1900’s.

The Hand Ball Wall was exceptional in its scale – 15 feet tall and 20 feet wide.  Because of this, I was able to use the district’s scissor lift instead of trying to accomplish it all with my ladders.  Phew!  The lift made it possible to ultimately reach my deadline.

One side of the wall faces the upper grades.  The other faces the lower grades.

The lower grade side features California state information, flag and missions, as well as the California Distinguished School District logo.  We’ve featured big beautiful poppies throughout.  “Knowledge is power” is the principal’s motto, so we’ve brought it into the foreground above the large book.  The blue butterfly is a symbol that reminds students to try to focus in class, as blue butterflies had conquistadors lost in the rainforests of Central and South America.  A magical paintbrush is featured in the upper lefthand corner next to this mural’s Glider.  A large apple is a reminder to eat right before school.  The ruler is the original number line, a mystery to many students and a crucial tool in mathematics that I use daily, so it’s near and dear to my heart.

The upper grade facing side of the Hand Ball Wall tells the story of the History of Aviation and Space travel from the Renaissance to present.  Selfies can be taken from the moon.  Orville Wright can be seen in flight.  The Sofia and Hubble telescopes are featured.  Airplanes, helicopters, Space shuttles and flying machines throughout time are featured.

John J. Montgomery’s Glider is featured on this side, both as a mascot plate and as a floating article about how his flying machines were inspired by the birds native to the Silicon Valley.  He also worked in the tech field laying telecom cables in the early 1900’s from San Diego to San Francisco, eventually making San Jose his home.

After a refinishing of the benches in the courtyard as a thank you, I consider this school officially finished.

The benches were a strange collection.  They’re from various dates and were various colors of wood grain.  This was fun.  It took a lot longer to sand down than initially anticipated but so worth it.  After finding the perfect colors to unite the woods, I painted the metal posts and staged the benches just in time for Back to School Night.  This was something the principal had spoken about doing herself theoretically, but I was able to handle that for her.

She means/meant so much to this school and community.  Now her mark on this school is everlasting and sparkles.  This second phase compliments the first phase while adding common core and other strong messages throughout.  “Knowledge is Power” is a redundant theme, as is the inventor and invention of the Gliders.  John J. Montgomery’s ultimate message is that there’s always something we could improve upon and letting the imagination soar, making modern flight possible.  Her message in tandem leave us all feeling like anything is possible with an education and an imagination.

This was an incredible project to work on over the summer.  The staff and students were super supportive.  We finished exactly by our deadline and being able to finish the benches made my client tear up.  Totally worth it!