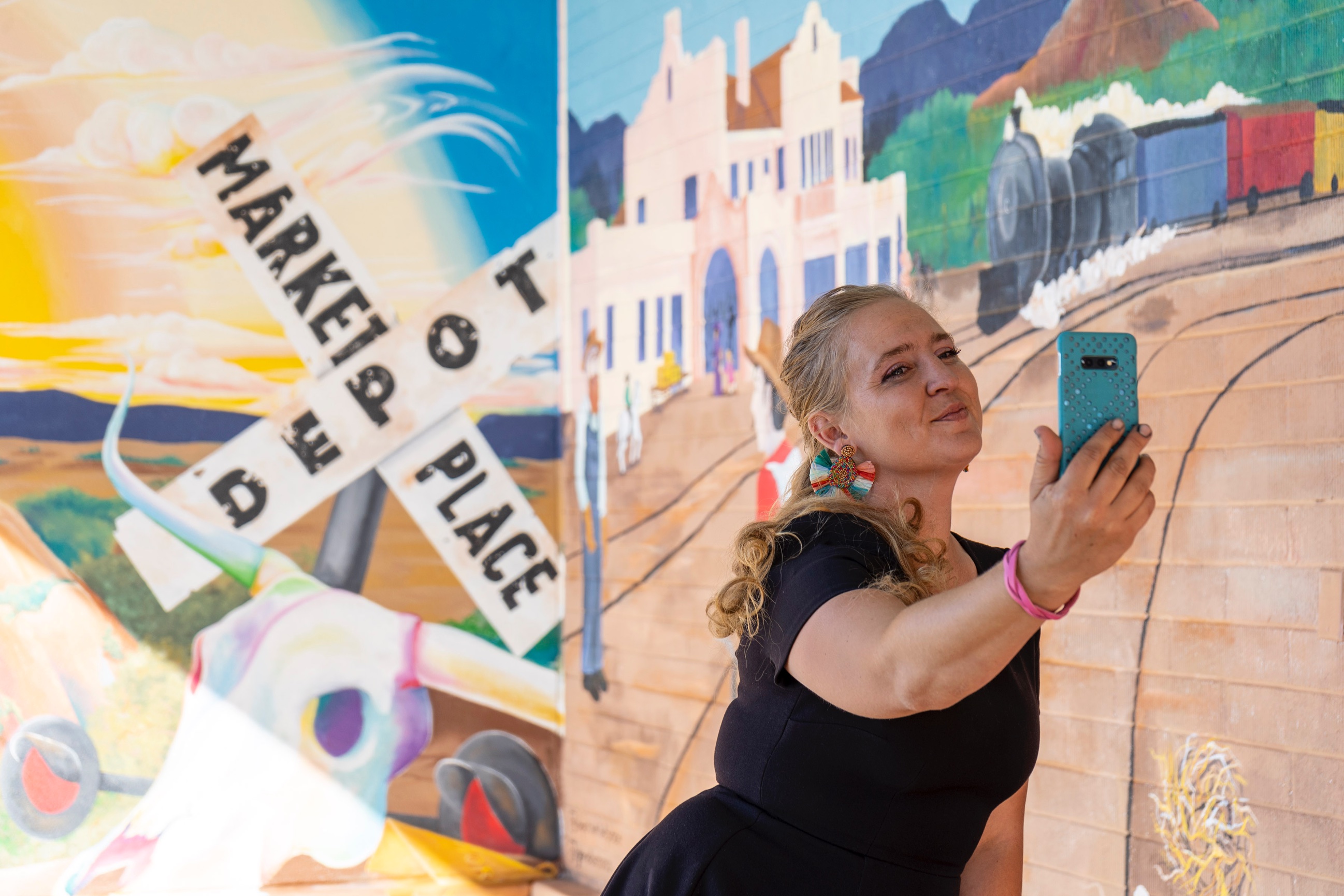 Hello, National Stage!  Hello, Everybody’s Hometown!  This was my first commission outside of California, which is a huge milestone for me professionally.  Being so grand an opportunity, I wasn’t prepared for how enjoyable this would be to do.  I will forever have the fondest memories of Prescott, Arizona and Depot Marketplace, @depotmarketplace. 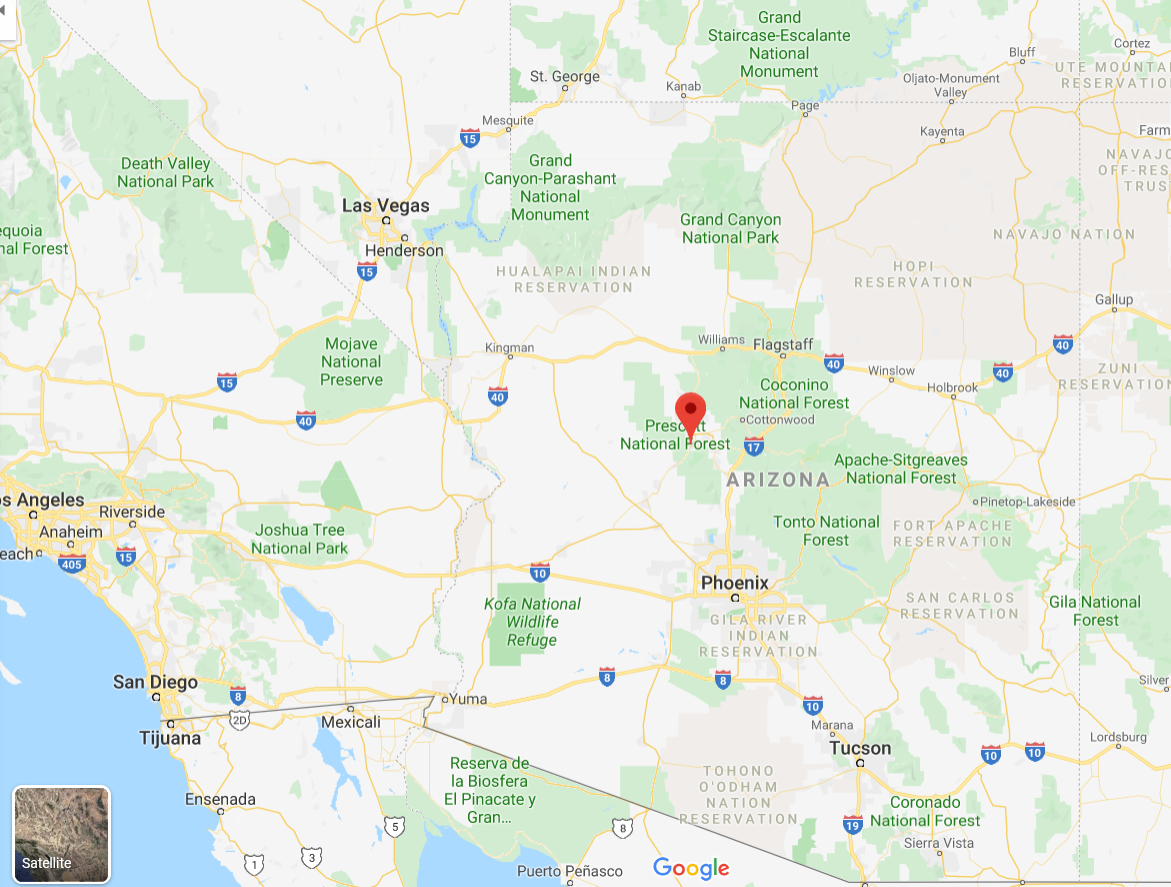 Now, for those driving the 10-12 hours out there, it’s North of Pheonix, South of Flagstaff and there’s not much around it besides Route 66 and Sedona.  That said, if you’re looking for the best road trip ever, Prescott is on your way.  Along with the Americana scenery getting here, this high desert town is the Old West before it was tamed by automobiles.  It’s a cute town with a lot of personality and plenty to do and see.  There’s lots of hiking to take advantage of.  There’s plenty of good eats and great shopping.  This is a tourist destination artists can afford to live in and set up storefronts.  I’m impressed.  Furthermore, the day excursions to be had with Prescott as your epicenter are incredible.  Sedona, Grand Canyon, Williams, plenty of artist communities and national forests.  It’s not a one day trip. 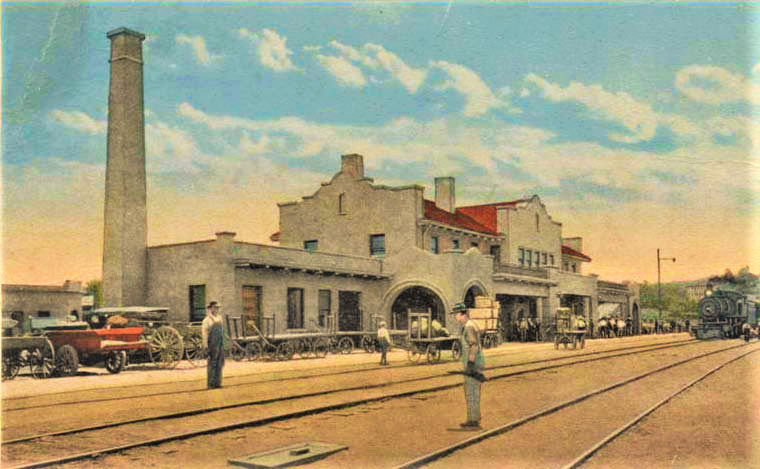 Now, I’m from the Silicon Valley and that heavily informs my creative process.  I took a first stab at the artwork and really appreciated the history of the area.  The actual property was the Santa Fe Train Depot to the right built in 1883.  This depot work up as spot on and we even made it 3 dimensional.  The second piece, though, wasn’t my best attempt.  I don’t think the client had strong opinions against it, but I knew I could do better to create “sense of place” and therefore better create placemaking. 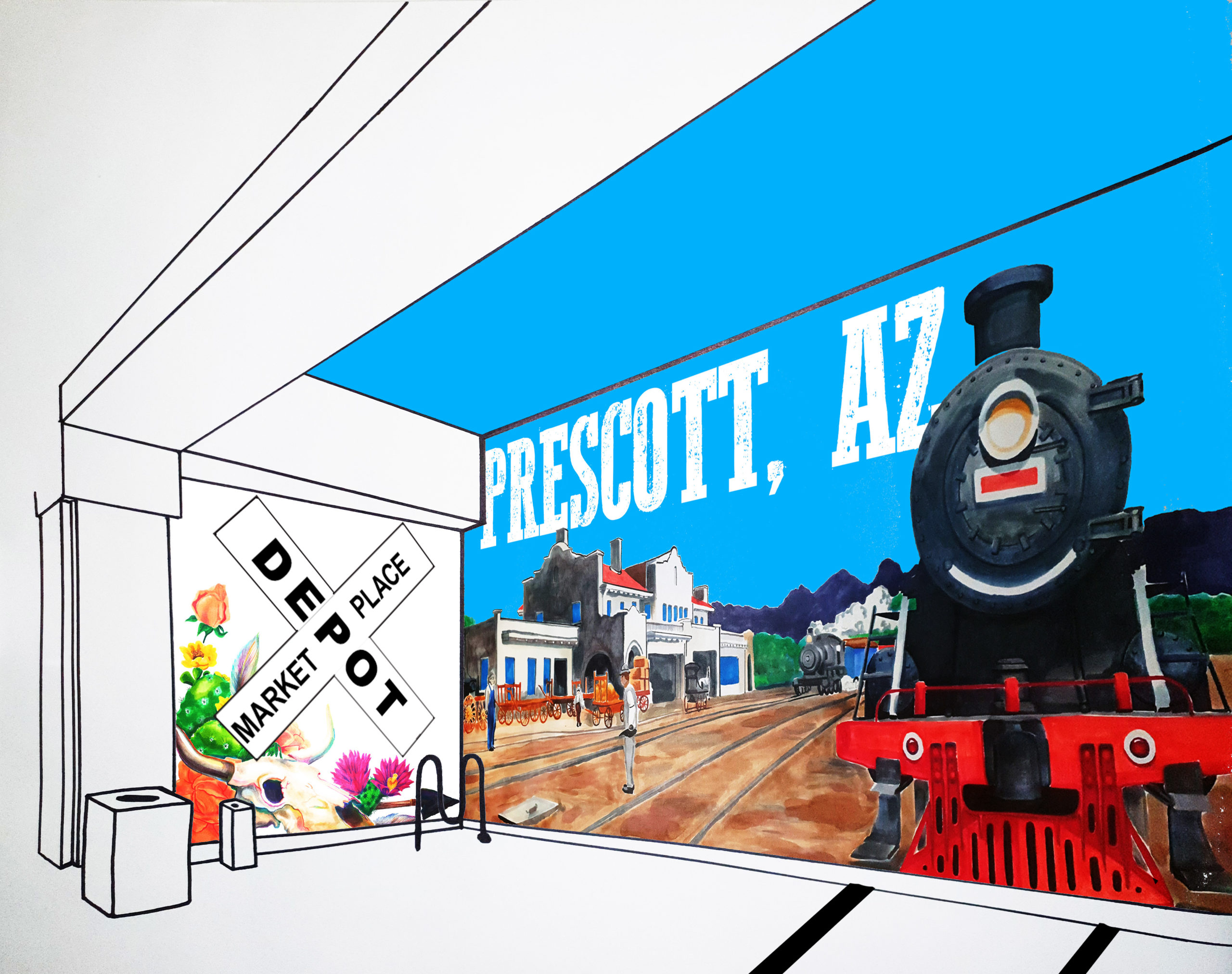 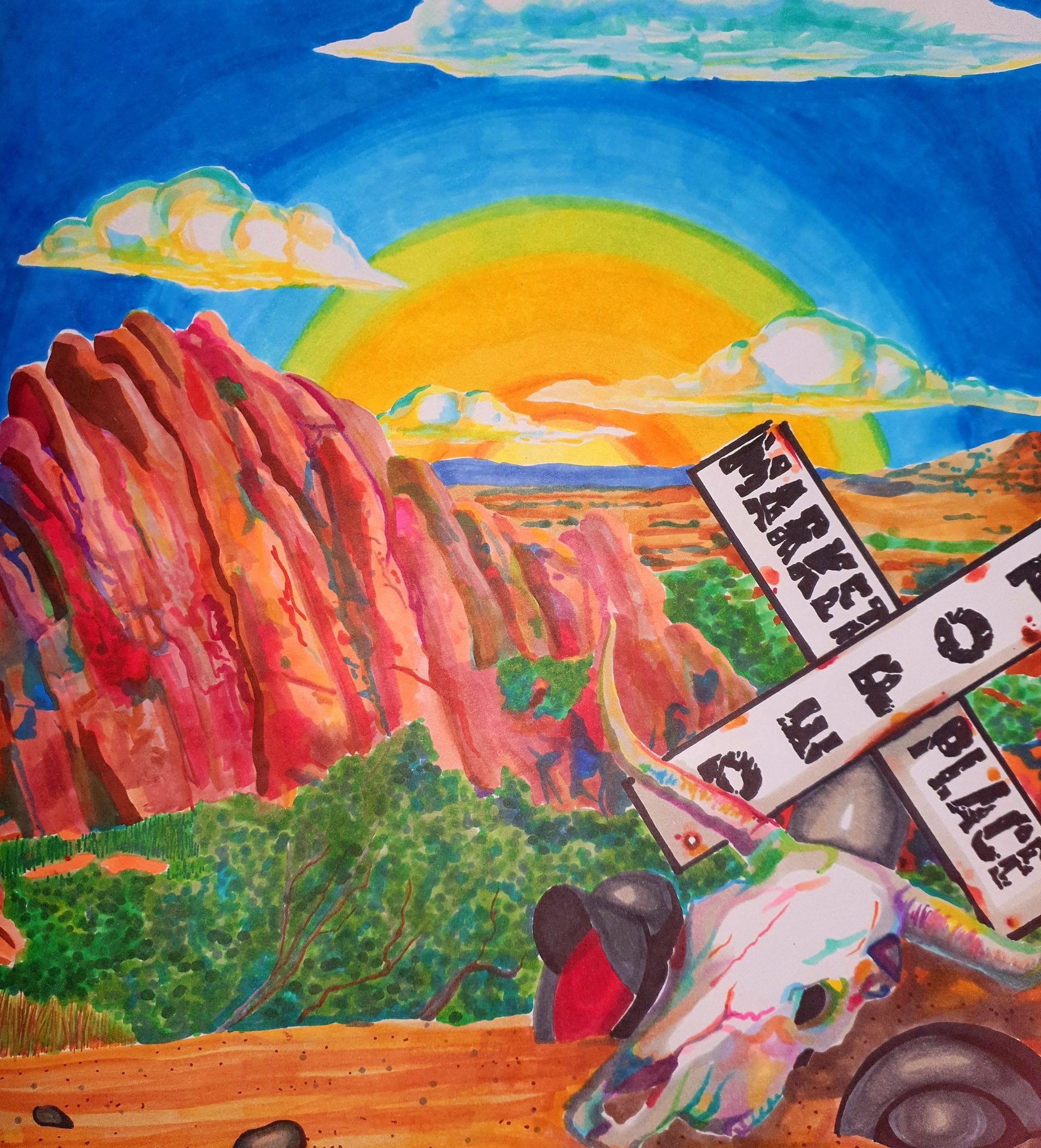 There’s definitely something to this sign and cow skull but maybe not the cornucopia of culture next to it.  The entire property compromises the historic train depot building and the adjacent cattle yards, with the tracks ran through the street.  I started investigating Prescott itself and found some of the prettiest rock formations nearby, the Dells or the Granite Dells.  What I didn’t realize was that the entire town is covered in hills and these pretty things.  This really represents Prescott while being beautiful.  It is also the first time I offered to paint my rainbow style into natural subjects.  I like it so much, month after the project and it’s still up on my wall. 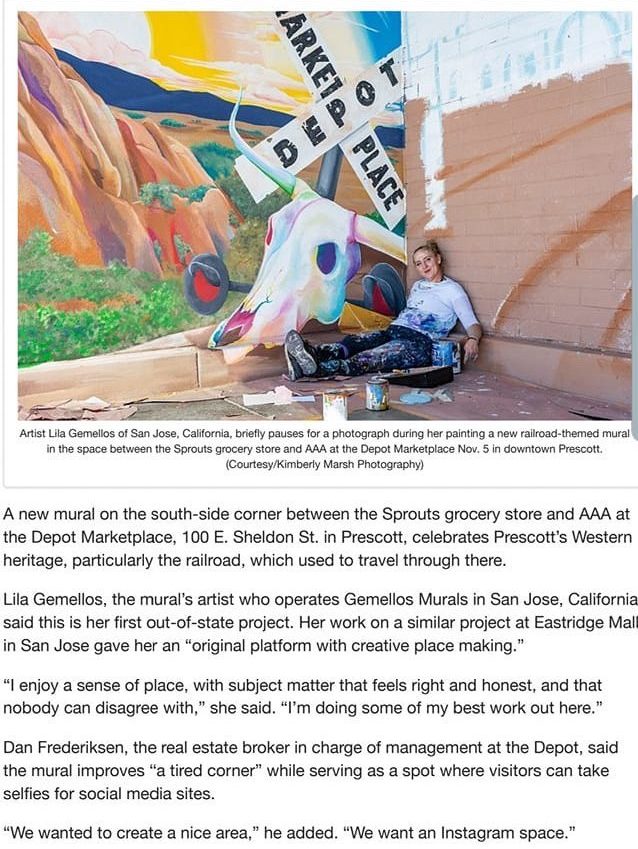 It was an inspired move.  This was the first portion to be painted and it struck a cord with passers by immediately.  People felt all the colors the sun casts throughout the day across their rocks.  I didn’t realize how spot on the cow skull was either until I started shopping downtown.  This is a legit decoration around these-here-parts.  I was just thinking of the historical aspect.  The clouds make the most interesting streaking shapes over the mountain line and into the high desert.  I definitely tried to paint their clouds and even started capturing them at sunset for social media. 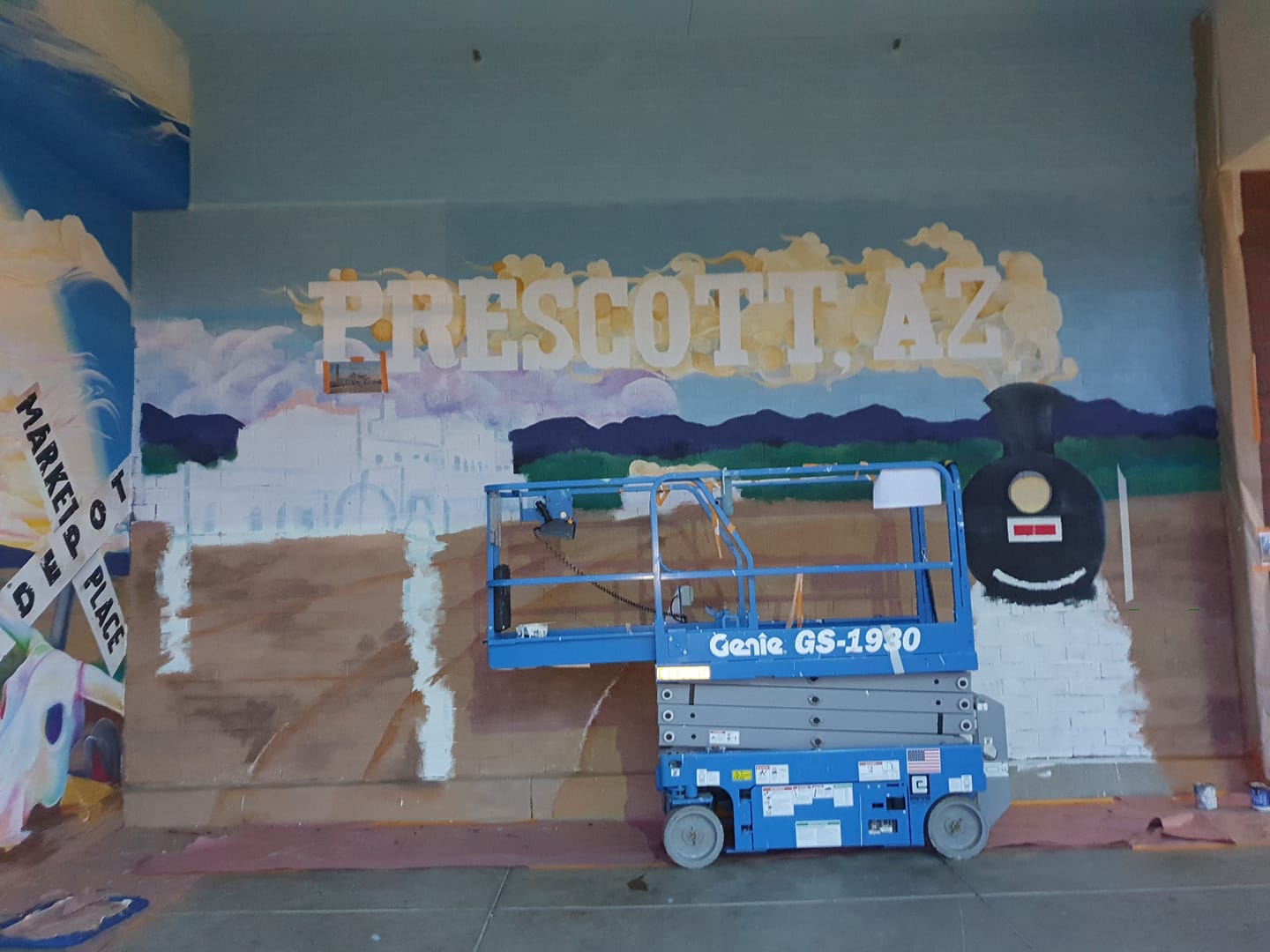 The train depot came out awesome.  I fought myself over the boring sky at first, because it’s never just a blue sky.  I added clouds at first.  I added steam behind the letters and it was too much.  Ultimately they competed.  The steam was the more dynamic of the two.  I also added Prescott’s “Thumb Butte”, a popular formation and hiking destination that rises above the town and ends up being the symbol for Prescott.  Tumbleweeds jazz up what’s on the ground. 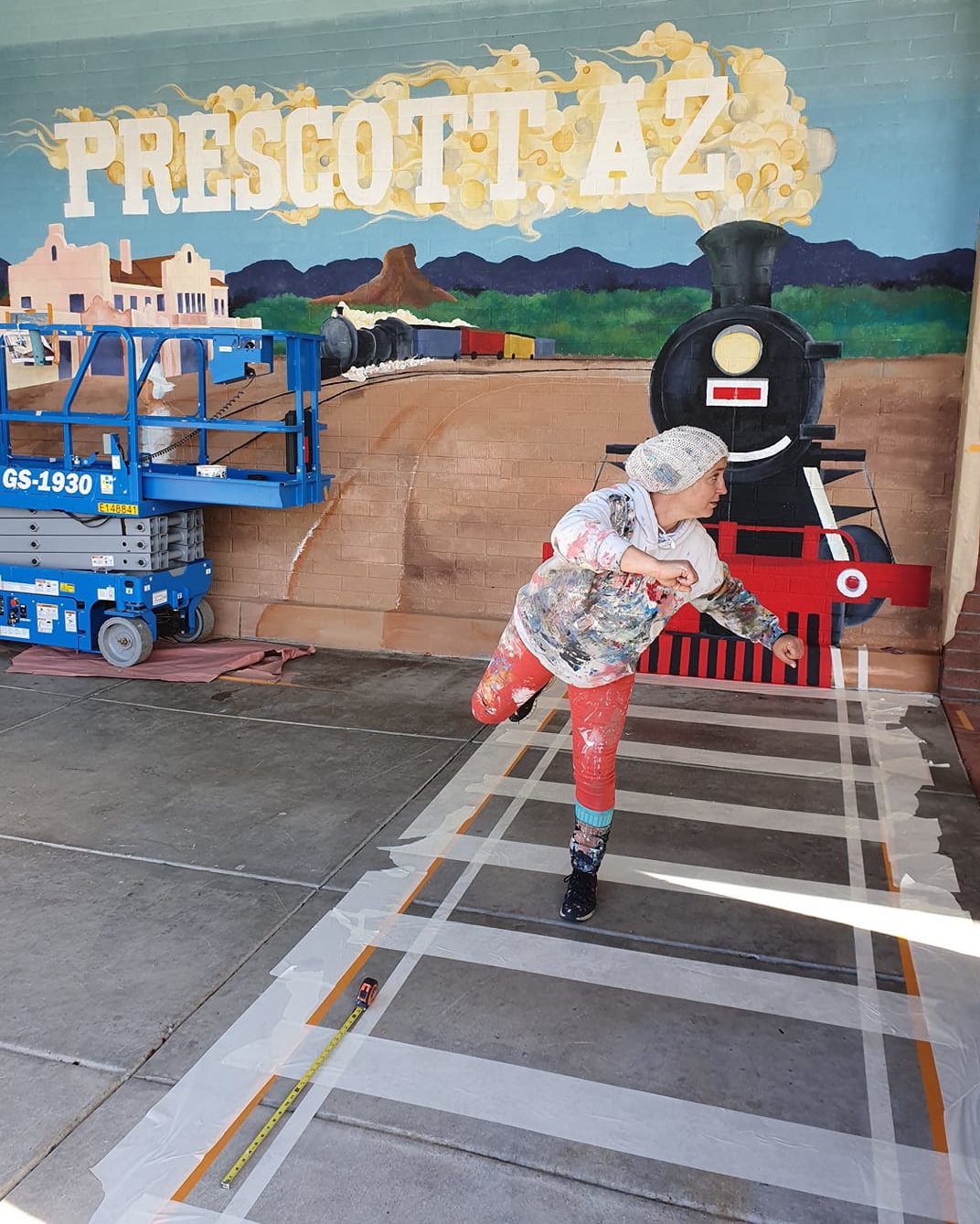 After spazzing out over the train itself, rails run out from the largest train quite seemlessly.  Simply running straight lines with a vanishing point around eye level works mathematically over both the horizontal and vertical surfaces.  I’m so glad I was able to sell this optical illusion.  They thought it couldn’t be done!  Well, laymen walking by couldn’t envision this 2d train entering the 3 dimensional field.  The different ways to engage here are pretty endless.  You can selfie with an oncoming train, run away, lay on the tracks, raise the lettering, be an engineer on the train or on the tracks…. you can really play with this baby.  They might at a little ding ding bell to the train for kids.  Wicked fun.  This is good for everyone, except that one lady who told me she almost got hit by a train.  That’s probably not her cup of tea. 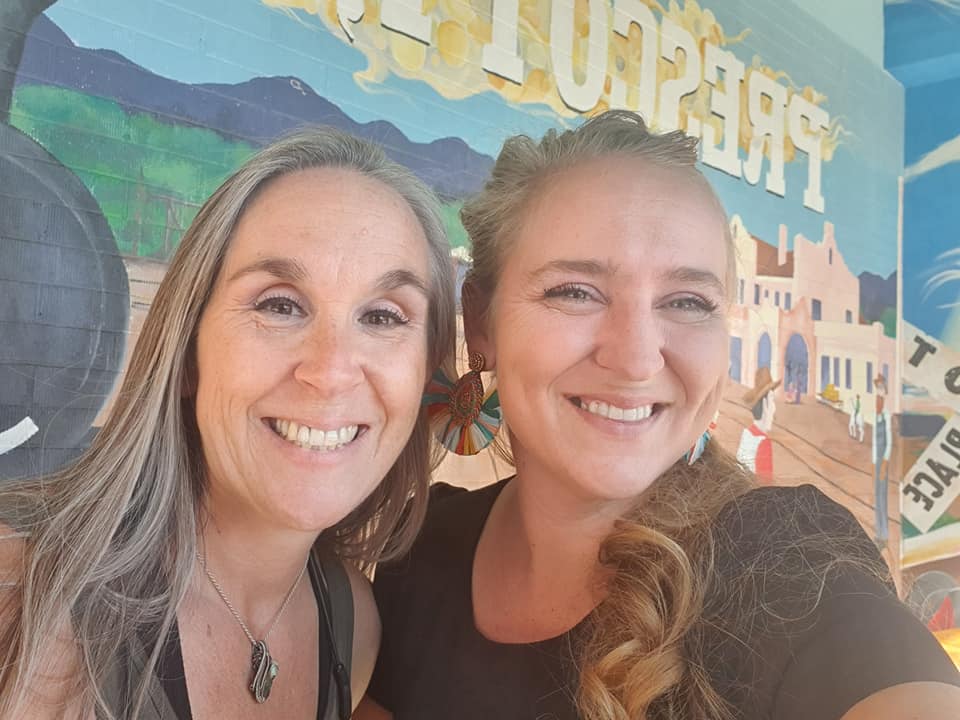 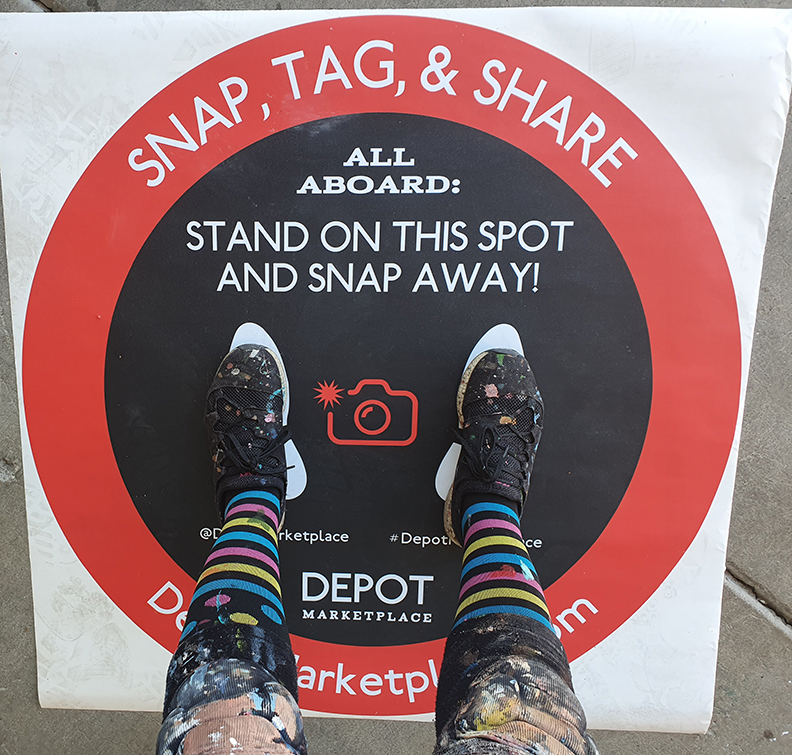 Depot Marketplace totally got our social media activated.  Through the efforts of Michelle Berryman with Kayyem Marketing and photographer Kimberly Marsh, this project already shines online.  I heard Santa recently made a stop here on a reindeer test flight. Kim was amazing!  Her work is so good, I took advantage and got great headshots and professional project photos taken.  We did a bunch of Press in Arizona!  It was awesome. 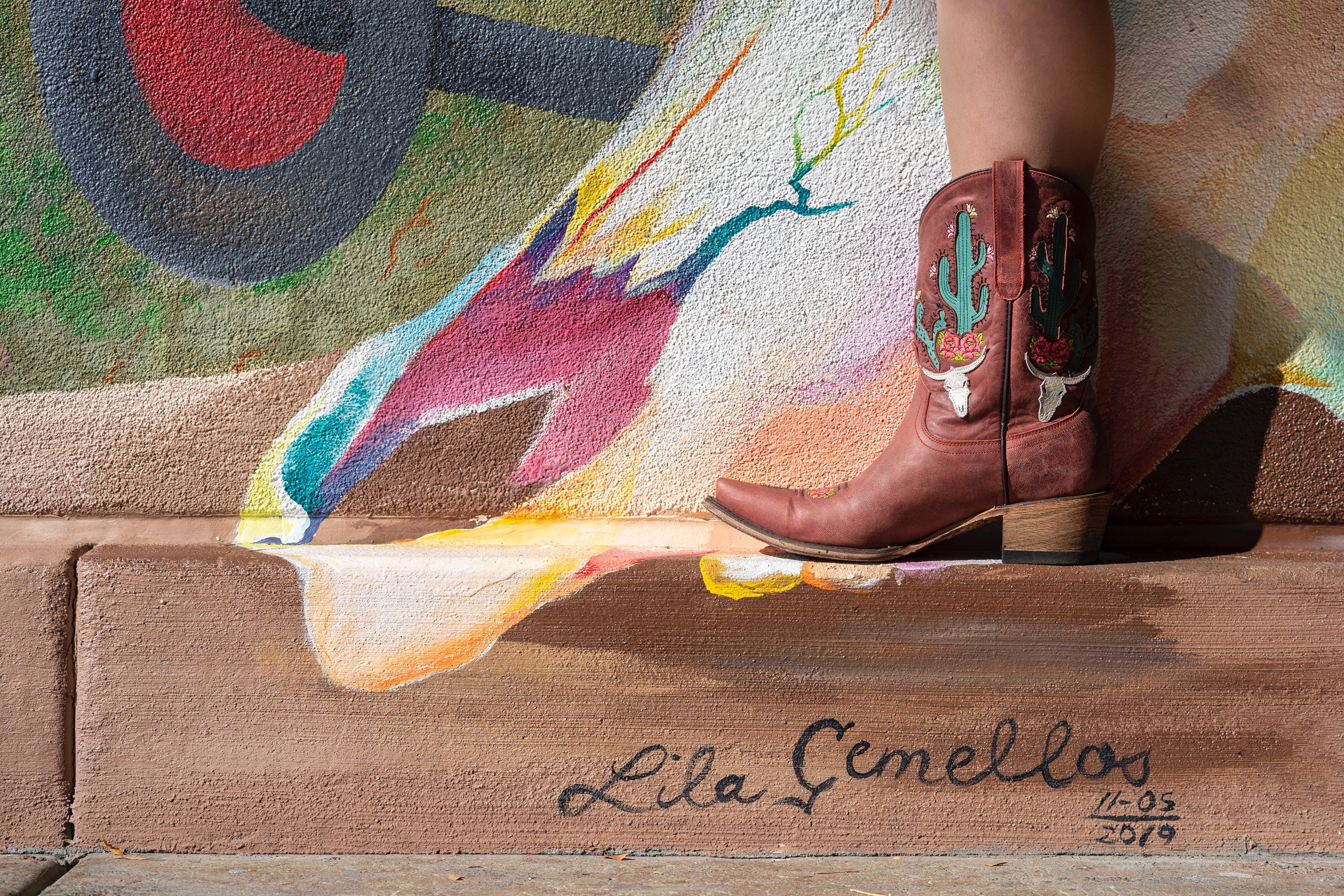 I tremendously wasn’t prepared for how friendly people would be or what an artist and art appreciating community this is.  I got a warm reception from the whole town, which is a contrast to Silicon Valley and people caught in the trance of their phones.  People were so gracious.  I geeked hard over their old-fashioned Veterans’ Day Parade with nearly 100 float entries.  I stayed in town a little longer because there is so much to do and see.  Shopping is wonderful because it’s an artist community and the high desert provides interesting hand-crafted fashions – like cowboy boots, hand-knit hug-warm sweaters and handmade jewelry.   I handled Christmas in November handily. 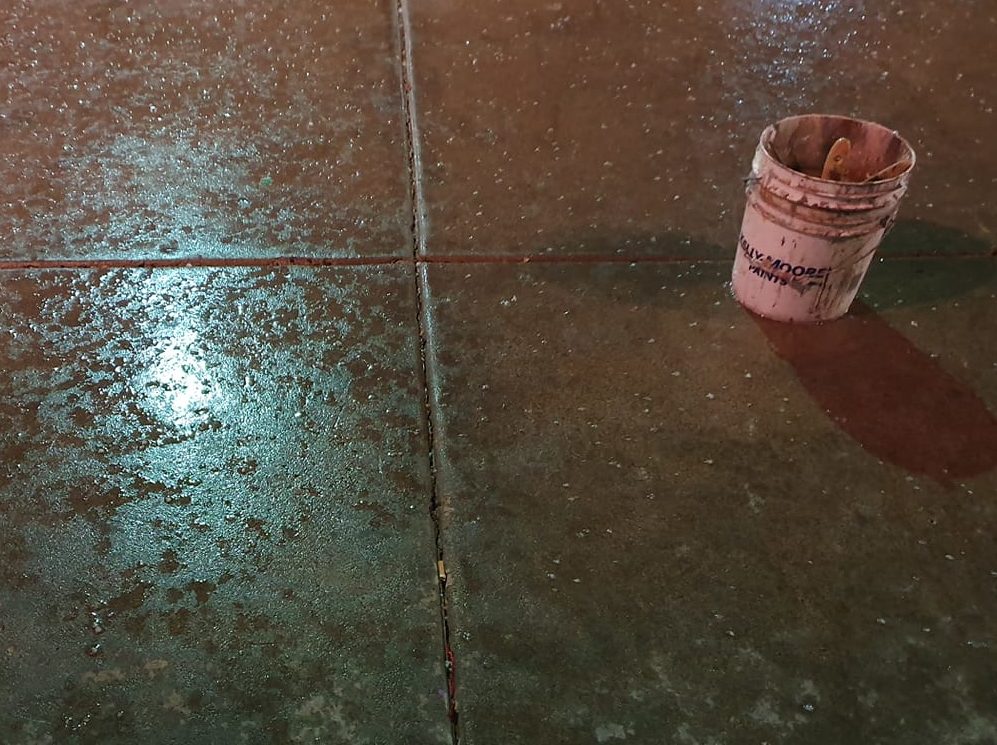 WEATHER – Californians, it’s a real thing across the rest of the country.

Arizona’s Sun feels enormous on the desert and it feels larger in the high desert.  Prescott has real winter weather.   The client and I did discuss that we couldn’t do the project any later in the year because it would snow at some point.  Though I narrowly escaped the coldest of weathers (snowed a week later), Prescott got hail and 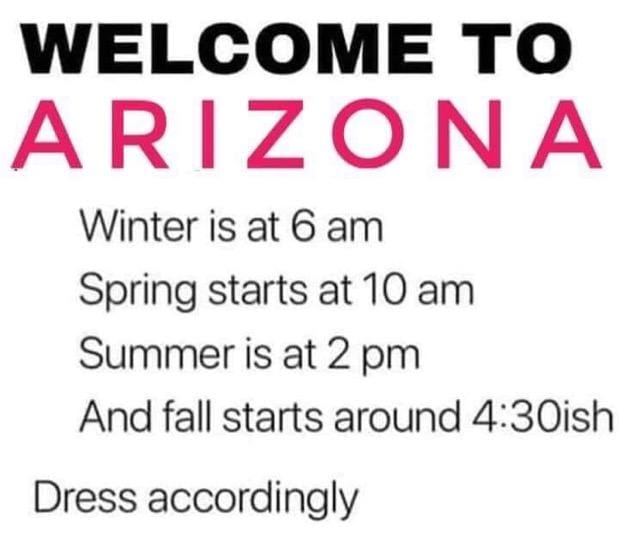 rain while I was there.  Any weather was covered by our awning and building but COLD has no cover.  Freezing was anytime the sun wasn’t up which meant everyone tries to run errands before 6pm.  And thus all the fuzzy sweater and hat options.  Though showers come on as quickly as they go, there was plenty of sunshine and cloud formations as well.  Thunder, lightning…. weather is rocking hard in Prescott. Dress accordingly is right.

Here’s the rest of  footage from Arizona.